Infrared LEDs are used in remote-control circuits, such as those used with a wide variety of consumer electronics. Choosing the resistor to use with LEDs 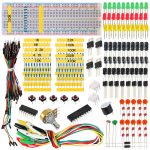