The term “JST” is sometimes incorrectly used as a vernacular term meaning any small white electrical connector mounted on PCBs.

JST manufactures a large number of series (families) of connectors. The PCB (wire-to-board) connectors are available in the top (vertical) or side (horizontal) entry, and through-hole or surface-mount.

End-users and 3rd-party sellers on eBay often describe connectors by their wrong name thus perpetuating confusion of the exact series of a specific connector. Unfortunately, it is very common in blogs and websites to incorrectly name a specific connector only by the name of the manufacturer.

To minimize confusion, it is best to describe a connector using: the manufacturer’s name, exact connector series, and optionally the pitch, such as “JST-XH” or “JST-XH-2.50mm” or “2.50mm JST XH-series” or other variations.

The official J.S.T. Co. website has a tool that allows users to check certain models for their authenticity and specifications.

JST and other PCB connectors 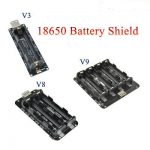 The installation of electronic modules requires basic knowledge and requires a certain electronic professional foundation and hands-on ability. Please purchase carefully! This product does not include 18650 batteries

JST 2P RCY Male or Female Head is also referred to as a BEC (battery eliminator circuit) connector and is commonly used with battery packs for RC applications.

The connector is keyed so that power cannot be reversed.