Arduino Board is robotic for student, science projects, robot car in high school, primary school and secondary schools. The shield is compatible with any Arduino boards such as the Arduino UNO, MEGA, LEONARDO

A High Current DC Motor Driver Shield that is made for Arduino to make the interfacing easier. It uses the L298HN IC that is known as an outstanding high-power motor driver chip. The shield is compatible with any Arduino boards such as the Arduino UNO, MEGA, LEONARDO and many more. It can also be used with non-official Arduino boards by connecting the essential pins of the motor driver shield to the Arduino Board perfectly. It can drive two motors simultaneously with different speed and direction. The shield has an extra terminal block that can be used if the DC motor needs an external supply. 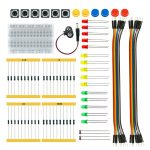