Mini-360 Buck DC-DC Converter accepts any voltage from 4 – 40V DC and outputs at a lower voltage from 1.25 – 35V DC. Output adjusted via a multi-turn potentiometer. Use it to run lower voltages from your higher power supply.

Mini-360 Buck DC-DC Converter Step Down Module 4.75-23V to 1-17V is a DC-to-DC power converter that steps down voltage (while drawing less average current) from its input (supply) to its output (load). It is a class of switched-mode power supply (SMPS) typically containing at least two semiconductors (a diode and a transistor, although modern buck converters frequently replace the diode with a second transistor used for synchronous rectification) and at least one energy storage element, a capacitor, inductor, or the two in combination. To reduce voltage ripple, filters made of capacitors (sometimes in combination with inductors) are typically added to such a converter’s output (load-side filter) and input (supply-side filter).

Switching converters (such as buck converters) provide much greater power efficiency as DC-to-DC converters than linear regulators, simpler circuits that lower voltages by dissipating power as heat but do not step up output current.

Buck converters can be highly efficient (often higher than 90%), making them useful for tasks such as converting a computer’s primary (bulk) supply voltage (often 12 V) down to lower voltages needed by USB, DRAM, and the CPU (5V, 3.3V or 1.8V, see PSU).

1. There may be slight size deviations due to manual measurement, different measuring methods, and tools.
2. The picture may not reflect the actual colour of the item because of different photographing light, angles, and display monitors. 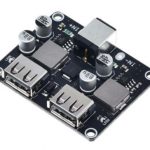 Buck converters can be highly efficient (often higher than 90%), making them useful for tasks such as converting a computer’s main (bulk) supply voltage (often 12 V) down to lower voltages needed by USB, DRAM, and the CPU (5V, 3.3V or 1.8V, see PSU).